A.D.D.: the Last D is for Disorder

ADD: the last D is for Disorder is the third episode of Clone High.

It originally aired on Teletoon in Canada on November 10, 2002.

Gandhi's dreams of being a dancer are hindered when he is diagnosed with A.D.D.

Ghandi had fun putting food in his nose and making this funny to Abe but not to Joan. Later have Cleo and JFK told that the Awareness Fair will start . But JFK didn't want to kiss fatties and he and Cleo broke-up again. Abe have made a company to her in rose garden. Gandhi have later make mess and noise during history test so mister Sheepman sends him to principal. But when Gandhi is diagnosed with Attention Deficit Disorder (A.D.D.) from mister Butlertron, the students of Clone High begin to ostracize him acting like its AIDS. Even Mary Curie have warn Gandhi to be careful. Soon the parents have capture Gandhi and put him in a institution. Abe must decide whether to please Cleo by doing the same, or to stand up for his "best dude 4 ever" and lose any chance of being with Cleo. Finally on the fair Abe decided to kiss Gandhi to prove that he loves him. People have than decide that hating gay people is better.

Meanwhile, Joan struggles with living up to the legacy of her 15th century clone mother, and begins hearing strange religious voices in her head. She went nuts but later reveals that her braces have been picking up signals from a Christian radio station and that she wasn't actually hearing the voice of God.

Also, Principal Scudworth starts wearing Mr. Butlertron's sweater vest, in the belief that it gives him the power to relate to the students of Clone High. But all the emotions and water from eyes made him scared. 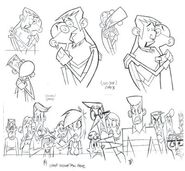