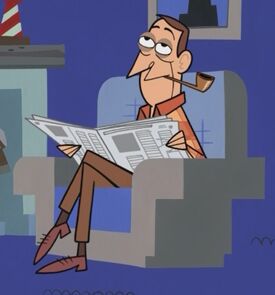 Abe's Foster Dad is the unnamed foster father of Abe Lincoln and the husband of Abe's Foster Mom. He is voiced by Joe Flaherty.

In "Raisin the Stakes: A Rock Opera in Three Acts", he and his wife found raisins in Abe's pocket, leading them to believe he was smoking, a discussion they had at the school's PTA meeting. It was then they found out that Abe was addicted to raisins. Abe's father grounded him for his drug use and Abe ran away. Abe's father helped with building Principal Scudworth's giant fence. He, like all of the other parents, got addicted to raisins too, making it officially uncool, getting their kids to quit.

In "Makeover Makeover Makeover: the Makeover Episode", Abe asked him for fatherly advice, when trying to make a decision between taking either Joan of Arc or Cleopatra to the prom. Abe's father strongly insisted he takes Cleo, as he went in great detail about how sexually appealing he is. His father basically peer pressured him into choosing Cleo, reminding him of how he'd be a social outcast if he didn't have sex with her.