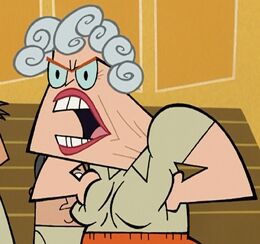 Eleanor Roosevelt is the gym teacher at Clone High High School and a genetic clone of American diplomat, humanitarian and first lady Eleanor Roosevelt. She first appeared in "Escape to Beer Mountain: A Rope of Sand".

In "Escape to Beer Mountain: A Rope of Sand", Eleanor Roosevelt gave her students the Presidential physical fitness test. When she heard Joan talking, while she was making her announcement, she sent her to the principal's office. As Joan walked away, Eleanor pervaciously watched her ass as she walked away.

In "Homecoming: A Shot in D'Arc", a terrified scream was heard and then Principal Scudworth walked up with blood on his hands, claiming that he was the new gym teacher, suggesting that he murdered Eleanor Roosevelt.

In "Changes: The Big Prom: The Sex Romp: The Season Finale", she was in the background at the prom, during the scene where Principal Scudworth reminded Mr. Butlertron that he rigged the election.

Eleanor Roosevelt is extremely masculine, an exaggeration of the perception of how un-feminine her clone-mother was. Eleanor is loud, bossy, and domineering to her students. Playing with more rumours of the Original Eleanor, her clone is a lesbian ephebophile, who found Joan attractive, given her clone mother's involvement with the Girl Scouts this has deeper nefarious implications.