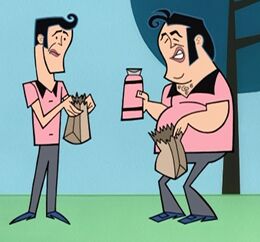 The Elvis Twins were two students at Clone High High School and 16-year-old genetic clones of American singer and actor Elvis Presley (or possibly clones of both him and his unborn twin, Jesse Garon). One of them is slick, smooth and attractive, while his twin is an overweight, pill popping drug addict. Respectively, these two represent Elvis, when he was young and in the height of his fame, and Elvis, later on, when his life went to the gutters. They first appeared in "Escape to Beer Mountain: A Rope of Sand". Fat Elvis has really let himself go.

In "Escape to Beer Mountain: A Rope of Sand", Slick Elvis was happy to see that his mother packed him steamed vegetables in his lunch. He asked Fat Elvis what mom packed for him, and he said that he got nine fried peanut butter banana sandwiches and a thermos full of tranquilizers. Fat Elvis proceeded to down the entire thermos, making him pass out and quote that "He had left the building." Abe noted how the second Elvis had really let himself go.

In "Film Fest: Tears of a Clone", The Elvis Twins were in Mr. Sheepman's class, while he gave the student a lecture on why not to instigate highly destructive angry mobs.

Concept art of the Elvis Twins. Note how extremely similar they are. 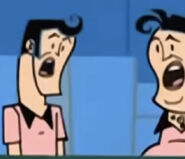