"If there's one thing Mahatma Gandhi stands for, it's revenge!"
―Gandhi

Mohandas "Mahatma" Karamchand Gandhi is the tritagonist of Clone High. He is the clone of Indian statesman Mahatma Gandhi. Unlike his original counterpart, Gandhi is a fun-loving, hyperactive teenage slacker, who lives in the moment and provides the show's comic relief. He is friends with Abe and Joan of Arc. Though he has the tendency to lie and betray them, he does change his ways afterwards and still remains a loyal and supportive friend to them. He is voiced by Michael McDonald.

Gandhi is an outcast at school. He is often considered annoying and a "spaz" by his classmates. However, Gandhi's desire is to be popular and constantly seeks acceptance by those around him. He is the class clown, life of the party and is a lazy, irresponsible and underachieving slacker. He also suffers from A.D.D. He plays the school's mascot, DNA Dan. He often serves as the comic relief and is best friend of Abe and Joan.

Gandhi is very short, skinny, bald, and has a goatee. He wears round-rimmed glasses and has a gold earring. He wears a gray short-sleeved shirt with a red stripe, blue jeans, white and red sneakers.

Gandhi is very an optimistic, hyperactive, talkative and energetic teenage slacker. The creators described him as being a "party animal with a heart of gold". According to himself in the first episode, he buckled under the pressure of living up to the real Gandhi and became a non-stop party animal. He can often be found to be annoying and stupid but kind and outgoing at times. Gandhi is often portrayed as selfish, arrogant and superficial but in the same fashion that all teenagers are. He tends to find trouble even when he tries to do good. He is often hinted to be very intelligent but hides it with his outrageous behavior and underachiever attitude.

Abe Lincoln and Gandhi have been best friends since they where babies, however Abe seems to spend more time with Joan and Cleo then with Gandhi. The two share "Best Dudes 4-Ever" lockets, as revealed in "A.D.D.: the Last D is for Disorder". Although Gandhi does care deeply for Abe, he has a difficult time staying loyal to him. This was exemplified decently in "Sleep of Faith: La Ru D'Awakening", when Gandhi and Joan held an intervention for Abe, trying to get him to seize his sleep deprivation streak. Gandhi was making a speech to Abe about how sleep deprivation kept him from enjoying the movie, American Pie but he swiftly ditched the intervention, once he heard said movie was on DVD and that he could make up for lost time. Despite the fact that Gandhi is clearly the dumber of the two buffoons, the one thing he consistently outsmarts Abe at is the knowledge that Joan has a huge crush on him. Gandhi has been well aware of this from the start and even shot Abe a sarcastic look in "Escape to Beer Mountain: A Rope of Sand", when he ignored Joan's obvious expression of love. This same sarcastic look was called back to in "Changes: The Big Prom: The Sex Romp: The Season Finale", when he made the face again after Abe came up to him, and told him that he made the shocking realization that Joan was in love with him.

It is usually assumed that Joan and Gandhi have been friends as long as Gandhi and Abe. Gandhi knows about Joan's crush on Abe but never says anything about it to him. In "Escape to Beer Mountain: A Rope of Sand", almost immediately after seeing her for the first time after an entire summer, Gandhi instantly started perving out over Joan's newly developed breasts, earning himself a punch in the face. Gandhi has actually been harmed a number of times by Joan, due to his idiocy and disrespect for her. He got himself tazed for abandoning her teen help hotline. Gandhi is afraid of Joan, because of this, although he doesn't like to admit it. Gandhi raved to Abe about how he doesn't fear Joan, only to freak out and jump off the balcony, when he saw her coming. In "Episode Two: Election Blu-Galoo", Gandhi insulted Joan for getting tongue tied with Abe, which was rather hypocritical, as he had just gone skinny dipping in a mote of pirannhas.

Gandhi appears to be attracted to Cleo as he once asked her to kiss him and has peeks at her getting undressed at night in "A Room of One's Clone: The Pie of the Storm". Cleo, however, hates Gandhi and finds him gross. Gandhi revealed he used to be her foster brother until Cleo convinced her parents at a young age to disown Gandhi as he was hurting her image. Even after Gandhi donated his kidney to Cleo when she was in terrible pain. All of this was explained in "Escape to Beer Mountain: A Rope of Sand". Cleo as her typical snobby self ignores that. Gandhi, just like Joan, developed a hatred for Cleopatra after a while, as he becomes aware that Cleo is trying to break up his and Abe's friendship because it would be bad for her image, as seen in "A.D.D.: the Last D is for Disorder".

JFK and Gandhi have an ongoing rivalry which escalated in the episode "A Room of One's Clone: The Pie of the Storm". However, in the episode "Plane Crazy: Gate Expectations" they teamed up to record a single that would later go on to be a number one hit. In Makeover, Makeover, Makeover: the Makeover Episode JFK bet his own reflection he could get Gandhi a prom date. When JFK gives him a makeover, the two get along pretty well until JFK accidentally reveals he only did it as a bet.

Marie Curie and Gandhi are both on the school's dance squad, "The Solid Gandhi Dancers". In "Makeover Makeover Makeover: the Makeover Episode", it is revealed that Marie has a crush on him. Though Gandhi seems not to return her affection because he is very superficial, however he decides she is the only girl who actually likes him, and in the next episode, Gandhi and Marie get together at prom.

After cracking under the pressure of living up to the original's calm, collected demeanor, the cloned Gandhi is bizarre, impulsive, and has diagnosed attention-deficit disorder. He is also obsessed with losing his virginity, in stark contrast to the real Gandhi's celibacy. However, he has adopted some traits of his clonefather - Gandhi is hinted to be a pacifist, refusing to engage in violence when JFK challenged him to a fistfight.

Gandhi after eating only X-Tream Blu for 2 days in "Election Blu-Galoo". 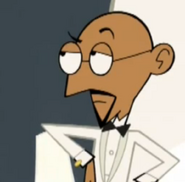