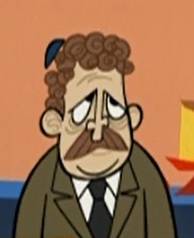 Gandhi's Foster Dad is the foster father of Gandhi and the husband of Gandhi's Foster Mom. He is a stereotypical Jewish man. He made his first major appearance in "Sleep of Faith: La Ru D'Awakening". He is voiced by Neil Flynn.

In "A.D.D.: the Last D is for Disorder", he was waiting in line for an open-mouth kiss from Cleopatra during the Awareness Fair. He also made a brief appearance during Abe's flashback to the time he and Gandhi were at a Jewish Temple and Gandhi shoved the Torah up his nose. Both Gandhi's Foster Dad and Gandhi's Foster Mom were present in the sidelines. He also appeared at the PTA meeting, without his yarmulke for some reason.

In "Sleep of Faith: La Ru D'Awakening", Gandhi ate dinner with his parents in his house. Gandhi's Foster Dad bickered with Gandhi's Foster Mom, before Gandhi interrupted them to tell them that he had found his true calling in life and wanted to be a trucker. Gandhi's Foster Dad was not on board with this and he claimed "I have no son!" out of disapproval.

In "Raisin the Stakes: A Rock Opera in Three Acts", Gandhi's Foster Dad attended the PTA meeting about Raisins. His wife rambled in denial about Gandhi doing drugs, and Gandhi's Foster Dad, sat down, not interjecting. He also joined the cloneparents, in getting high on raisins, themselves.

Gandhi's Foster Dad behaves like a bare-bones stereotype of a Jewish man. He complains and moans about everything constantly, and apparently has problems with his wife, as he not only argues with her, but has shown interest in other women, despite being in a monogamous relationship with her.