"I never thought Hell would be this pink."
―Joan

Nicole Sullivan
Joan of Arc (Jeanne D'arc) is the deuteragonist of Clone High. She is the 15 year old clone of 15th Century French heroine Jeanne D'arc. Unlike her original counterpart, Joan is a dispassionate, nihilistic Atheist, who dresses like a goth. She has an unrequited crush on Abe, but won't admit it, due to being friendzoned, by him, while he dates her arch-rival, Cleo. She is voiced by Nicole Sullivan.

Joan is a cynical, sarcastic, angst-ridden, deadpan goth girl who has a secret crush on her best friend, Abe. Joan doesn't seem to hang out with any students other than her friends Abe and Gandhi. Despite her antisocial behavior, she is able to sleep with JFK, one of the more popular students at Clone High. Joan admits to being a "goth", though she doesn't appear to exhibit the typical behavior most Goths have, but appears to have a more "art girl" appearance, similar to Jane Lane from the other MTV series Daria.

Joan's appearance consists of a tight black long-sleeved shirt and tight green cargo pants with black boots. She has pale skin and dark red hair, and wears black eyeliner, purple lipstick and a black choker around her neck. She also wears an orthodontic retainer.

When Cleo gave her a makeover, she wore a different hairstyle, purple eyeshadow and eyeliner, red lipstick, and a tight black sleeveless leather minidress with a black and red, lacey pushup bra being revealed, with fishnet stockings and high heels to highlight her shapely physique. Joan wore a bright red seductive dress with matching heels. In her original design, she had black hair, And appeared to be more religious.

Joan is a calm, cool, and collected individual who seems to be less sociable and outgoing than her friends. Although, Joan don't act much as a goth person which many others who embraces the goth culture such as heavy-metal music, wearing alot of black deadpan related outfit and is emotionless since she has a more of "the rock rebel bad girl" image than a typical goth. She is very sexually frustrated with herself and with Abe who is obsessed with dating Cleo because of her popularity and good looks and instead of Joan. She brings out her grief by crying and has confided with various characters such as Mr. Butlertron, Gandhi and Jesus Cristo whenever she needs emotional support. She is very dark, moody, and at times can be very grumpy. She is prone to brutal violence, like hitting and punching, which mainly Gandhi and JFK are subjected to. She has a very tomboyish personality, and has been shown to be somewhat of a feminist and environmentalist. It is revealed in the episode A Room of One's Clone: The Pie of the Storm that Joan is a semi-vegetarian.

Abe Lincoln has been Joan's best friend since childhood. She is deeply in love with him, but it is unclear how long she has harbored this crush. Despite her constant annoyance with Abe being oblivious to her feelings towards him, and how easily he is willing to give in to Cleo, she still cares very deeply for him.

Though Joan generally doesn't like Gandhi directly, they both consider Abe to be their best friend. By devoting much of her time to Abe, she also ends up spending a lot of time with Gandhi; though the two sometimes get on each others nerves, for the most part they are fairly good friends. Gandhi knows about Joan's crush on Abe, and sometimes tries to help her, such as in the episode Sleep of Faith, when Joan tells Gandhi to pretend she said something funny when Abe comes; however, his attempt to help her fails because the funny thing he thought of was that she just farted. Joan will often hurt Gandhi when he gets on her nerves, and she has punched him in the face twice: once in Escape to Beer Mountain, for looking at her breasts, and again in A.D.D.: the Last D is for Disorder for taking her retainer.

Cleopatra is Joan's rival. Joan's hatred for Cleo first started at JFK's party, when Cleo expressed interest in Abe, though at this point, their rivalry is one-sided. In Sleep of Faith: La Ru D'Awakening, Joan worries about Abe not getting enough sleep, and confronts Cleo about it, telling her that they need to help Abe. When she sees that Cleo doesn't care about him at all, her hatred escalates. In A Room of One's Clone: The Pie of the Storm, Cleo and Joan have to move in together after Joan's house burns down. This causes them to fight more than usual, eventually turning into a cat fight, though eventually, a pie fight resolves their conflict and they agree to have an unspoken hatred for each other. They don't fight for the next few episodes, until Makeover Makeover Makeover: the Makeover Episode, when Cleo is blatantly mean to Joan, though she later decides to help Joan out by giving her a makeover.

Toots is the foster grandfather of Joan of Arc. She addresses him by name. Despite his incompetence, foolish decisions, and tendency to destroy everything, Joan still loves him, because of how he's provided for her all her life. Like with Abe, Joan struggles to stop Toots from doing stupid things and getting himself in bad situations. The biggest examples of this were in "A Room of One's Clone: The Pie of the Storm", when Toots revealed that he constructed the house to be highly flammable, resulting in it getting destroyed, and then later, when Toots fell in love with Cleo's Foster Mom and moved in with her.

Joan disagrees with almost everything Joan of Arc stood for. For example, Joan is an Atheist, while original Joan was a highly religious Catholic. That being said, Joan doesn't try to live up to her clonemother's legacy, like other clones do, and instead fully embraces her own personality and goes her own way. Unfortunately, she can't seem to get away from her destiny either.

In "A.D.D.: the Last D is for Disorder", Joan thought she was hearing voices from God and/or other religious figures in Heaven. Upon hearing this, Joan almost instantly started believing in God. Joan's first quote upon enlightenment was "The voices, finally, the voices!". Since she had proof of her clonemother's standards to be founded on truth. She could take seriously the attempts at being like her. It wasn't until later on, that she found out these voices were actually just radio signals from a Christian radio station being picked up by her retainer, which logically, got her to go back to the way she was before.

In "Homecoming: A Shot in D'Arc", she knew the story of Joan of Arc being burned at the stake for standing up for what she believed in. This, however, didn't stop her from standing up for gender equality in basketball. Mostly, this was due to her thinking that in modern society, there'd be no way people would sincerely incinerate her. At least, not until Mr. Butlertron computed the statistics of that fate's likelihood. He gave her a rather disturbing number, which struck a nerve for a second, but still didn't curb her devotion to do what was right.

In "A Room of One's Clone: The Pie of the Storm", a very ironic coincidence ensued, when a hurricane struck Exclamation! U.S.A., and a bolt of lightning struck her house and burned it to the ground, mirroring her clonemother's ultimate fate. Luckily for Joan, it wasn't herself that got destroyed in the fire, but this would only be the first of many bridges, she'd cross to reach her true destiny. 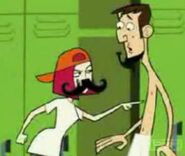 Joan in her underwear 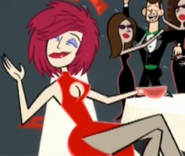 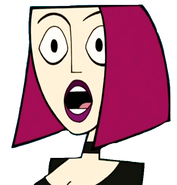 Joan in the intro (transparent)
Community content is available under CC-BY-SA unless otherwise noted.
Advertisement