Julius Caesar is a recurring character and student at Clone High High School. He is the eloquent-speaking friend of JFK. He is the clone of Julius Caesar.

He is one of the popular kids but is really friendly unlike the others. He is often hanging out with JFK, Cleopatra and Catherine the Great. He speaks with in an aristocratic accent with Roman expressions. It is suggested that he and Catherine are dating even though Catherine sleeps with JFK. From one of the quotes on the 2003 MTV website he implies that he is in a relationship with Catherine: "By my troth, Catherine the Great, thou hast playéd with mine heart of stone, and yay, I hath returned but not my pyre" and the two are often seen together. He is also a fan of Laurence Olivier.

In "Escape to Beer Mountain: A Rope of Sand", JFK bragged to him about "invading Marilyn Monroe's bay of pigs." JFK then proceeded to vanish in an absurd manner.

In "Episode Two: Election Blu-Galoo", he was in the audience for Abe and JFK's election speeches.

In ""A.D.D.: the last D is for Dong", he gets annoyed with Gandhi's obnoxious behavior in class. He later warns Jesus about using the nail gun.

In "Film Fest: Tears of a Clone", he was seen in the audience, watching Abe Lincoln's film, "It Takes a Hero" and falling asleep, because of how boring it was.

In "Homecoming: A Shot in D'Arc", Julius was part of the Clone High Basketball Team. At the end of the game, he congratulated Abe for scoring the final point in the basketball game, despite Joan being the one who really made the shot.

In "A Room of One's Clone: The Pie of the Storm", he is seen walking in the school hallway right before Abe and Cleo inquire Joan about her house being destroyed. He later encourages the fight between JFK and Gandhi at the Grassy Knoll, while throwing stuffed crazy bread at them.

In "Raisin the Stakes: A Rock Opera in Three Acts", he had a very deep singing voice, when singing the lyric "Our freedom will be here. That is a given." in "Normal". He later stated that he loved ingesting raisins, but it never occurred to him that he should smoke them. When smoking them later, Julius said that smoking raisins was like "LSD on acid".

In "Litter Kills: Litterally", Julius was a good friend of Ponce de León, and described him as a "regular character".

In "Snowflake Day: A Very Special Holiday Special", Julius Caesar was at the Snowflake Party. He was the first to notice how someone put itching powder in everyone's costumes, and put razor blades in all the food.

He wears a white t-shirt, blue jeans and sneakers. He has black hair in a Caesar haircut and wears a wreath on his head similar to the images seen of Julius Caesar.

Julius Caesar is an aesthetic artisan, who uses his refined semantics to the highest degree. Despite being overall sophisticated, he obdurately degrades himself to being the foolhardy chuckle head best buddy of JFK. 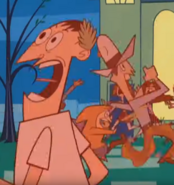 in new york i milly rock hide it in my sock 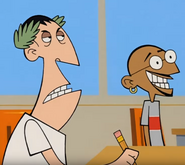 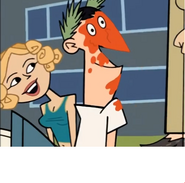 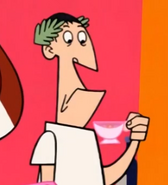 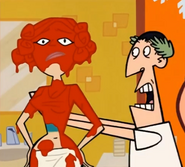 Running to the bathroom
Community content is available under CC-BY-SA unless otherwise noted.
Advertisement