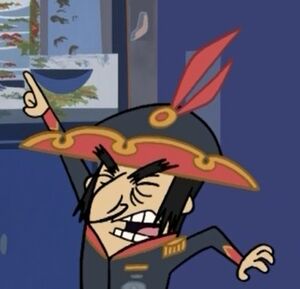 Napoleon Bonaparte is a clone of a great French general and emperor. He is an assistant manager at T.G.I. Chili's, a restaurant chain at the mall, and he is a jerk to his employees, including Abe and Gandhi. Abe notes that he must have some kind of complex which is a reference to Napoleon complex. When Abe drops a glass, Napoleon forces him to eat it. He talks in a French accent.

Napoleon is very short. He has black hair and a large nose. He wears a uniform similar to his clone father's.

He has a very bad temper. He gets angry easily and he often yells.