Juan Ponce “Poncie” de León was a student at Clone High who first appeared in the episode "Litter Kills: Litterally", and later appeared in the season finale "Changes: The Big Prom: The Sex Romp: The Season Finale".

He is voiced by Luke Perry.

Poncie did not appear in any episodes prior to the one in which he was killed. This is intended as a parody of various television shows in which new characters are introduced for the sole purpose of being killed off; such characters are often established as long-time friends of the main cast, even though the audience has never seen or heard about them before.

Poncie was cloned in 1987, using DNA from the original Juan Ponce De Leon. He was adopted by Glen the Janitor, and raised in his household. It's likely that sometime during his childhood, Poncie befriended JFK and became a really good friend of his. This friendly bond would grow tighter with time, creating fond memories along with it. It's possible that some time later, he also befriended the other main clones, and formed connections with them, which, though not as strong as the one with JFK, were still some very good friendships.

Like with all the other clones, Ponce attended Clone High High School, where his friendly attitude and wicked coolness, easily made him one with the popular crowd. With JFK still by his side, Ponce hung out with Cleopatra, Catherine the Great, and Julius Caesar, while still having time for his unpopular friends, Abe Lincoln, Joan of Arc, and Gandhi. Littering was trending with the popular folk, and Ponce happily rode the littering bandwagon.

He bears a strong resemblance to his voice actor Luke Perry. His character appears to be based on Fonzie from Happy Days as well as Dylan McKay from the popular '90s teen soap opera Beverly Hills, 90210 (who was actually played by Luke Perry).

Poncie was a friendly, easy-going student, who was on good terms with pretty much everyone at the school, no matter how small on the social scale. None of his friends, however share as timeless a bond with him as with JFK. Poncie illustrates how much he loves living, always finding ways to live-in-the-moment and make himself feel alive. He treats every day as though it were his last and he wants to keep this up until the day he dies. He wouldn't be caught dead, not enjoying the finer things in life and is always just having fun, having fun and laughing to death. All of these "life" and "death" terms are obvious means of foreshadowing his early death. Poncie probably gets his happy attitude from his father, who happens to be an overly happy and loving father, who wouldn't hurt a fly.

Despite never appearing in any episode prior to the one he was introduced in, Ponce de León was JFK's best friend (boyfriend). They had matching tattoos. JFK was distraught when Poncie died, Ponce had left JFK his pants in his will, and his mind even hallucinated Poncie's ghost. It was one of few times JFK allowed himself to be vulnerable.

It is also possible that the two shared a more romantic relationship (due to JFK's response to Ponce's death, and various other scenes eluding to JFK's possible bisexuality). 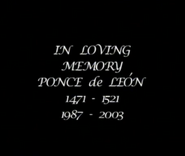 One of the subliminal messages in "Raisin the Stakes" alludes to Ponce's death.

Ponce as he appears in the final episode.
Community content is available under CC-BY-SA unless otherwise noted.
Advertisement