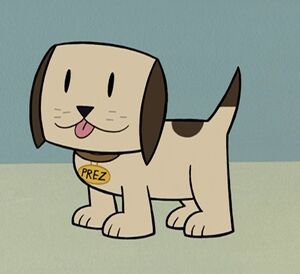 In "Episode Two: Election Blu-Galoo", President Dog wanders on stage during the school election voting (which is measured using an Applause-O-Meter). The whole school finds him so cute that they all let out a giant "Awwwww", which was detected as a cheer from the Applause-O-Meter, therefore making him class president. Cleo tried to woo him so he would pass his presidency over to her, but this failed.

In "A.D.D.: the Last D is for Disorder", President Dog accompanied JFK and Cleo, when they were putting up posters to spread awareness for awareness. JFK accused Cleo of sleeping with the President Dog. This broad assumption caught President Dog as off-guard as it did, Cleo.