Van Gogh is a clone of Dutch painter Vincent van Gogh. He is a student at Clone High High School and a recurring anti-hero on the show. He first appeared in "Escape to Beer Mountain: A Rope of Sand".

In "Escape to Beer Mountain: a Rope of Sand" he calls the teen crisis hotline about his emotional struggles but is humiliated by Gandhi on the other line who is at a party.

Later during the party, Joan pantses Gandhi and steals his boxers leaving his private parts exposed. Although Gandhi thinks that no one was around to see it, Van Gogh witnesses it in the bushes, and says "Yes, no one indeed." with an evil grin.

At the end of the episode during school, he gets his revenge on Gandhi by painting a mural for the Teen Crisis Hotline that looks like the original Van Gogh's famous painting The Starry Night except with a picture of Gandhi with his pants down saying "no problem too small", insinuating that Gandhi has a small penis.

In "Film Fest: Tears of a Clone", he is first seen running right in front of Abe during the cross country meet. Van Gogh is also at the front of the angry mob, and yells "Stupid stop sign!" before yanking it out of the ground and breaking the library's windows with it.

In "Homecoming: A Shot in D'Arc", he is shown watching the basketball game, and is later hopping around and cheering with the basketball team when Abe helps them score a point by Abe convincing Joan to shoot the free throw(s).

At the beginning of "Raisin the Stakes: A Rock Opera in Three Acts", Van Gogh is seen singing with the other characters, hanging outside a window smiling.

In "Changes: The Big Prom: the Sex Romp: the Season Finale", Van Gogh is amongst those who Gandhi recruits in his prom posse, and is briefly seen during the conga line. Also, in a blink-and-miss it moment, he is behind Julius Caesar before the Board members pop up in the meat locker.

Van Gogh is seemingly one of the shortest students at Clone High, and is a bit thin. He has short, red hair and orange lines on his chin for a beard. He wears a big white bandage around his head, seeming to reference the ear, that he lost, while in his painting career. He wears a blue jacket, a tan undershirt, cyan pants, and black shoes.

Van Gogh is the "emo kid" of the school. He suffers from depression and is misunderstood just like the original Van Gogh but Clone High exploits this to make him look comically nerdy. Unlike most students at Clone High he actually is as talented at painting as his clone father. He is not very popular and couldn't get a prom date, and ended up going with Gandhi's "Prom Posse".

In "Escape to Beer Mountain: A Rope of Sand", Van Gogh emptied his emotional baggage over the Teen Crisis Hotline, while Gandhi put him on speaker at a public party, so that everyone could mock and laugh at him. Deeply offended and hurt, Van Gogh swore revenge and got it when he caught Gandhi literally with his pants down and painted a wall-sized mural of Gandhi nude on the side of the school next day. Despite their adversarial relationship, in "Changes: The Big Prom: The Sex Romp: The Season Finale", he was part of Gandhi's prom posse. They were able to bond and develop a friendship over how neither of them could get a girlfriend.

-Sunny Day by "The Abandoned Pools" (Used for all students)

-Normal by "Clone High Crew" (Raisin the Stakes: A Rock Opera in Three Acts, Van Gogh can be seen with Julius Caesar)

Van Gogh in his room

Van Gogh in front of his mocking painting of Gandhi 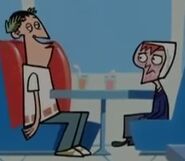 Van Gogh outside his window
Community content is available under CC-BY-SA unless otherwise noted.
Advertisement